Your Anger Can Become a Helpful, Clean and Beautiful Emotion

“Anger is an intense and flammable emotion that we might be uncomfortable with, but we need to become comfortable with it because we all have it inside and if we’re trying to suppress it then it can display in more unhealthy ways. Anger is helpful and clean.” – Caroline van Kimmenade (The Happy Sensitive)

How do you feel when you see injustice and unfairness? What does it do to you inside?

Chances are they get to you in some way. They speak to the core of your being where your heart beats for change with a longing for things to be different.

There is a positive anger that responds within you. A clean and helpful anger. A signal that many sensitive types experience when their mind and body are calling something to attention.

Anger can get placed on a list of so-called negative emotions; things such as fear, anxiety, sadness, and jealousy. It is a strong emotion, it can feel volatile and we are taught in many areas of life, to bottle it up.

But it’s important to let it speak so that we can choose our response to it. It is OK to get angry. The experience of anger itself is not the problem. It’s how you deal with and respond to the anger is where things can get messy. 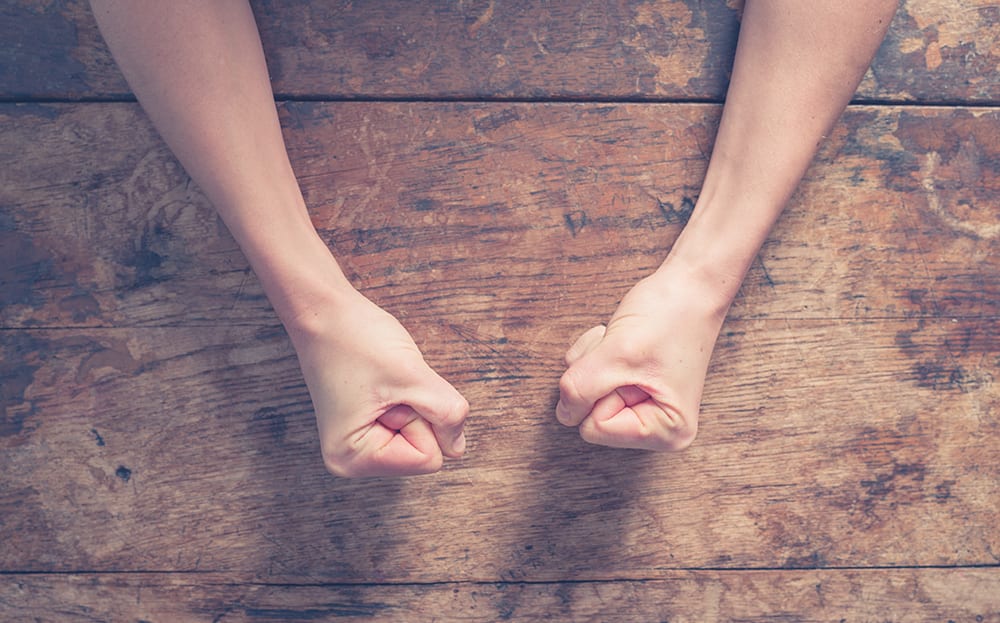 It is a matter of choice and control.

We have a choice over what we do with fear and anger. Whether we use them in a positive and pro-active manner, or allow them to control US (including suppressing them – pretending they aren’t there).

For many of us it can be difficult to know what to do with the anger we experience in response to external stimuli such as injustice, exploitation, power-abuse etc. It may not be your natural inclination to channel your anger into confrontation and aggression. This is not a bad thing.

Highly sensitive people often naturally gravitate to the middle ground, to a place of diplomacy and peacemaking. We are able to see and communicate with both sides; empathising and understanding why people make certain choices as well as the underlying reasons for certain outcomes.

There is a very important role that relies on an ability to see truths that underpin reality and to find peace within it. This can often be mistaken for condoning ‘the other side’, but empathy isn’t about excusing or justifying ‘the enemy’. It’s about the gritty process understanding the roots, context, and background truth of a situation or behaviour.

Change Starts From Within

Have you ever noticed that the worst way to try changing someone’s opinion is by trying to change their opinion? We’re all pretty stubborn when it comes to other people telling us what to think, believe or do.

We often see the failure of evangelists who make it known that everyone must subscribe to their exact worldview. Evangelists of religion, vegetarianism, political persuasions, art forms, TV programmes, etc. In other words, those who try to change another’s opinion by overtly trying to change their opinion.

Change starts from within. The priority is finding your own values and living by them. Eliminate your hypocrisy, don’t care what others think of you and something strange might happen…people will start to take you and what you have to say seriously. Even if you don’t really want them to.

Rage Against the Machine, Not the People

People aren’t the machine they seem to represent. It’s easy to blame the face that is presented to us, but it’s very rare that who we encounter on behalf of institutions and decision-making bodies are those that control them.

As gentle rebels we can lead the world in treating those on the front line (the customer service representatives, the call centre workers, the workers) as human beings with dignity and respect. We must instead find ways to rally against the systems and machines that create the poor conditions, the exploitation, the injustice.

No Meaningful Change Without Inspiration

The most endearing and enduring quality of the gentle rebel is the value they place on positive interaction and seeking pro-active transformation. The world has enough cynicism, division, and aggression. Gentle rebels are all about another way – inspiring change, engaging in conversation, and creatively bringing the truth of humanity face to face with the lies we are told about who we are.

The ironic by-product that comes from aggressive activism and debate is the reinforcement it gives to the ‘other side’. It makes people more vehement in the defence of their cause. This happens out of principle and pride as much as anything whenever someone feels pushed into a corner or looked down on. Gentle rebellion retains the belief that all people are equal.

Gentle rebellion is creative curiosity. It’s cheeky defiance against the status quo, the way things are, the norm. It’s not ideological. It’s not the preserve of one particular political position. It’s for all of us and is grounded in one fundamental underlying principle…empathy.

It is the response to empathic anger, which is how we feel when things don’t sit right. This kind of anger is a good kind of anger. It’s clean. It’s fresh. It’s beautiful.

Question: What stirs empathic anger inside of you? How do you respond to it? Please leave your answer in the comments below.

Read More
There is nothing that shows your strength better than your gentleness. It might sound a little bit odd.…
Read More
325
0
483

Read More
I’ve just finished my first week on call at my new job as an undertaker. Life took an…
Read More
9
0
2